This is an ancient ""Greek" dance:

Are these really Greek? Let's look at this video(and audio) and pictures: 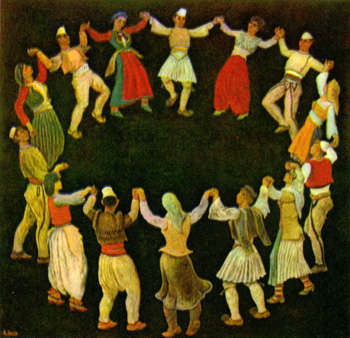 If you look carefully this video 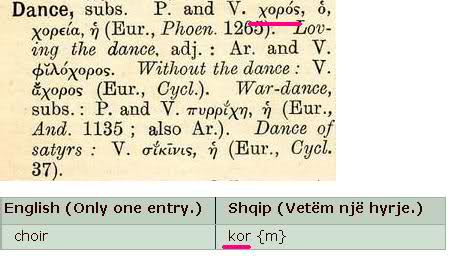 while Albanians is using another of their words to indicate the dancing:

from illyrian to greek

Albanian Folklore in Shkup (Skopje), the Macedonian Vardar.
Look at the costumes, and the way of the dance. It looks like a combination between Tosk and Gheg, but mostly Gheg.
The costumes look very similar to the Labs!

While the Zurna is middle eastern, it has substituted the previous double-reed, zurna looking, double aulos... or cule dyjare.

another version of the ancient dance.

Ancient Dances of the Balkans are present only among the Albanians.
What has been misnamed as Greek, needs to be fixed immediately.
All history books need to be revised.

This is one of many proofs that the now-called Albanians are of pre-Hellenic (and most likely of) stock.

There are "Greeks" words that can be explained only in Albanian (and not Greek/Hellenic), "Greek" dances that are copies of Albanian dances, "Greek" folk that is a copy of Albanian Pentatonic music, "Greek" foustanella... the #1 dress considered Hellenic, was never worn by Greeks until after 1800's, Ancient Greek gods being explained only by Albanian language.


information made possible by udhësi

Some of the moves and positions taken in the last video are similar to the "Valle Çame":

and here a false one , Greek THIEVES trying to alter very meaningful dance movements & figures into "modern" acrobacy and circus.

After this ugly performance lets return back to the authentic dance with its harmonious movements and elegance, enjoy it:


and compare to this ancient picture: