Gjirokastër: Albania’s Town of the Stones

Gjirokastër: Albania’s Town of the Stones 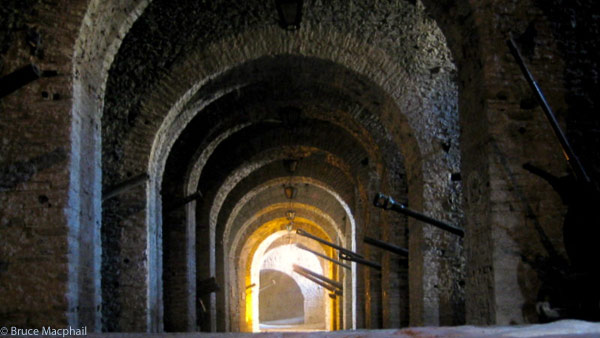 The city of Gjirokastër in the southern part of Albania has several claims to fame. Besides being the birthplace of two of the most important Albanians – communist dictator Enver Hoxha and world-renowned writer Ismail Kadare, the city also brings together different elements of the country’s mixed history, representing its Byzantine, Ottoman and Communist pasts.

During his visit to the “Town of the Stones,” BalkanTravellers.com contributor Bruce Macphail marvelled at the city’s scenery and explored the traces left by its various inhabitants through the centuries, including a Byzantine castle, a well-preserved Ottoman town, which is now a UNESCO World Heritage site, a museum of armaments and an ethnographic museum.

This article is part of a series of travelogues by Bruce Macphail as he makes his way from Istanbul to Durrës, Albania, along Via Egnatia, the Roman road that cut through the Balkans.

Text and photographs by Bruce Macphail

Set hanging off a cliff on the sides of the Drino Valley in southern Albania, Gjirokastër’s unique architecture blends in its surroundings, as the traditional houses are built with grey stone. 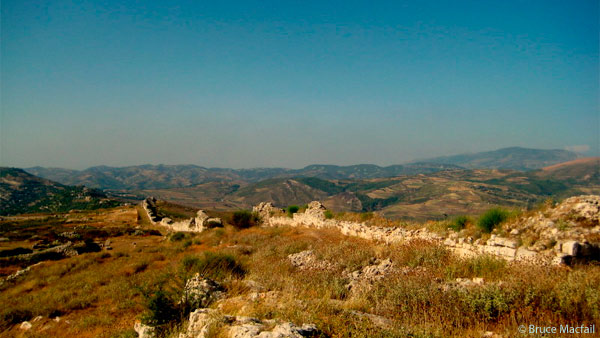 Given its grey tint, Gjirokastër is a particularly impressive city to reach by night. Going up the hill, along steep cobbled street, to the main square where the hotels are located, the limited street lighting adds to the gloomy outlook of the place. 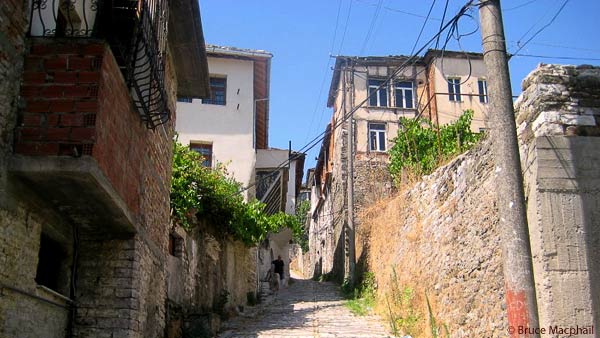 Albanian writer Ismail Kadare describes the city’s atmosphere well in one of this most famous works, the 1971 novel, Chronicle in Stone, which is set in Gjirokastër: “Everything in the city was old and made of stone, from the streets and fountains to the roofs of the sprawling ago-old houses, covered with grey slates like gigantic scales.”

The old city has an unsettling tone and it is no wonder that it is the home of the two most notorious Albanians of the twentieth century.

Enver Hoxha and Kadare both originate from this town. Despite sharing worldwide fame, it is for two very different reasons.

Enver Hoxha was the Communist leader of Albania from 1944 until his death in 1985, spending over 40 years in power. Born into a Bektashi family, a Sufi order of Islam, Hoxha’s birth home is now converted into the Ethnographic museum.

Gjirokastër is also the native city of Ismail Kadare, the internationally famous Albanian writer, a candidate for the Nobel Literature Prize and recipient of the first Man Booker International Prize in 2005.

The novel Chronicle in Stone, with its extraordinary turn of events, closely reflects the city’s dark and mysterious flavour.

“It was a strange city, and seemed to have been cast up in the valley one winter’s night like some prehistoric creature that was now clawing up the mountainside,” Kadare writes in the novel.

But, in addition to these two prominent figures linked to the town, Gjirokastër’s long history was marked through the centuries by many others too: Byzantines and Ottomans, followed by Greeks, Italians, Albanians and finally – Communists.

Although traces indicate the area was inhabited by humans as early as the first century BC, historical sources claim the city was founded under the Byzantine Empire in the twelfth century.

It flourished as a major commercial centre under Byzantine rule before passing to the Ottomans in 1417, which made it the southern Albanian province’s administrative centre and commercial hub.

The Ottomans left Albania formally in 1912-13, less than 100 years ago, as a result of the First Balkan War. In the four decades between 1913 and 1944, the city changed ownership several times – Greece, Italy, and even Germany controlled it on various occasions, before Albania – as it fell under the Communist regime, finally reclaimed Gjirokastër in 1944.

Under the regime, the city developed as an industrial and commercial centre and was elevated to the status of a museum town as Enver Hoxha’s birthplace.

These historical twists and turns, reflected in the traces left by the city’s various inhabitants through the centuries, make for an interesting array of sites that attract visitors to the city today.

Gjirokastër’s most obvious site, the caste - Kalaja e Gjirokastres, manages to unite all the significant parts of the city’s history. Supposedly dating to pre-Christian times, the current structure is from the thirteenth century, when the area was under Byzantine rule. 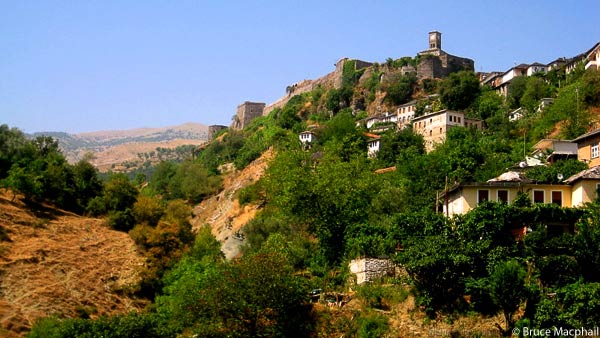 It is still well preserved today, having undergone subsequent renovations, of which an important one was undertaken by Ali Pasha, western Rumelia’s ruler, who extended the castle in the nineteenth century.

At that time, the structure was used as a garrison for the Ottoman army. Its latest use, under Communist rule, was as a prison and the jail cells can still be seen on the castle’s top floor. 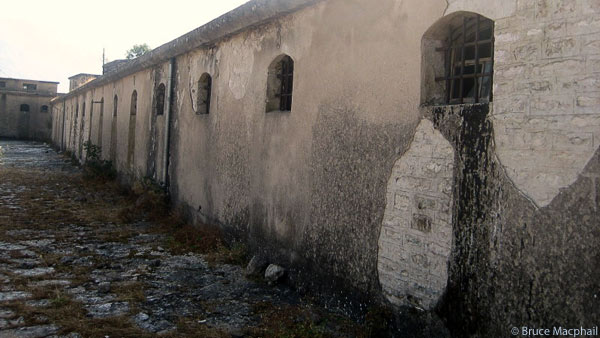 Inside the walls, there is a cafeteria that boasts a terrace affording a great view of the city and valley, as well as an indoor area down in an old room of the castle, with thick walls and limited light. 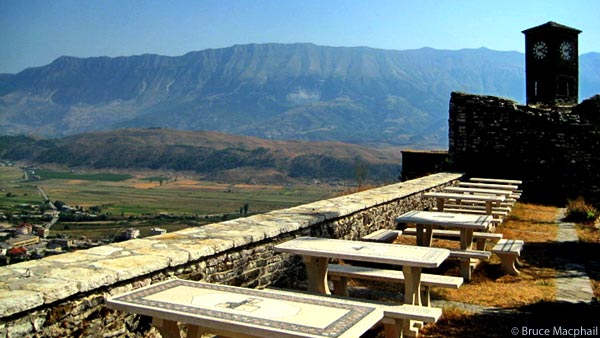 The National Museum of Armaments is also housed in the castle. It has a limited collection, as the castle was pillaged several times in the 1990s. The remaining arms are mostly foreign built and there is a Lockheed T33, shot down in 1957, on exhibit in the castle. 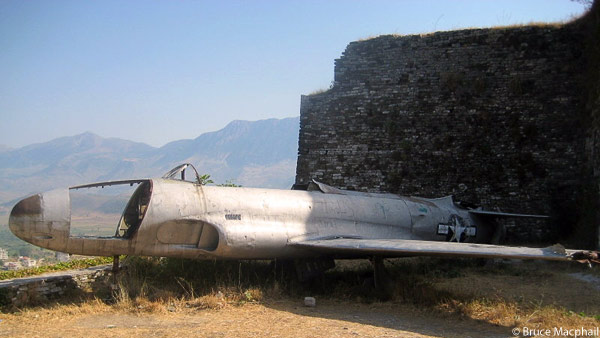 Ottoman rule left a strong mark on Gjirokastër’s architecture too and one of the interesting sights to visit in the town are the traditional Ottoman houses. 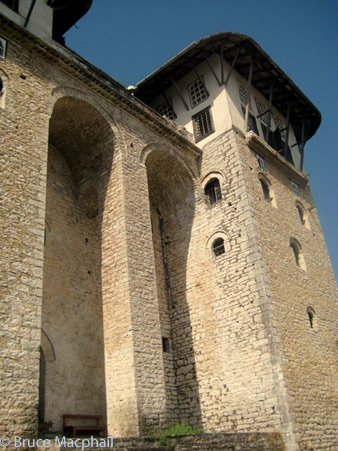 Architecturally, the most interesting addition by the Ottomans are the tower houses which housed the wealthy Ottoman merchants. One of them is particularly well conserved. Built in 1812, the two-towered Zekate House can be visited with permission of the family.

The Zekate house is a short hike from the main bazaar, there is a gate at the entrance with a guard dog which looks too old to incur any serious damage but barks loud enough to let the owners know of a visitors presence. An old lady living in a house adjacent to the Zekate House has the key to the main house and she’ll exchange it against a small fee. The large key opens the massive front door, where the visitor can explore freely. 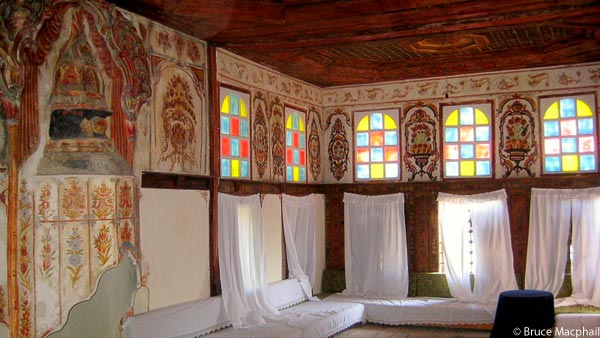 The edifice is built on four stories and has intricate engravings in the sitting rooms of the top floor. The view on the castle and valley are stunning.

Located closer to the Zekate house, the Ethnographic Museum is also worth a visit. Albania is home to such a diverse set of cultures that ethnographic museum can be seen in most historical towns, and they always offer a wide range of variety in the costumes and other artefacts. Also worth noting the museum is located in the house where Albanian dictator Enver Hoxha was born. 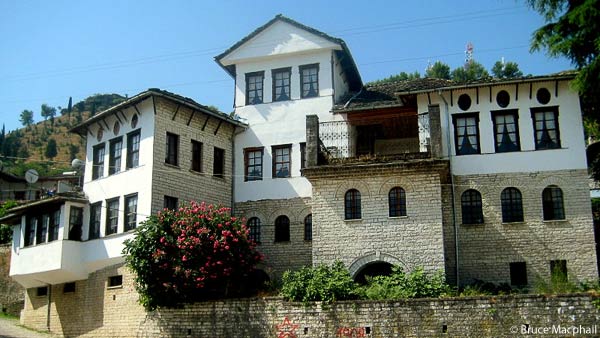 The old bazaar, Pazari i vjetër, at the foot of the fortress, was originally built in the seventeenth century, but had to be rebuilt in the nineteenth century after it burned down. It is home to numerous typical stone houses. In the summer time, it is very lively in the evening with terraces and live music being played. 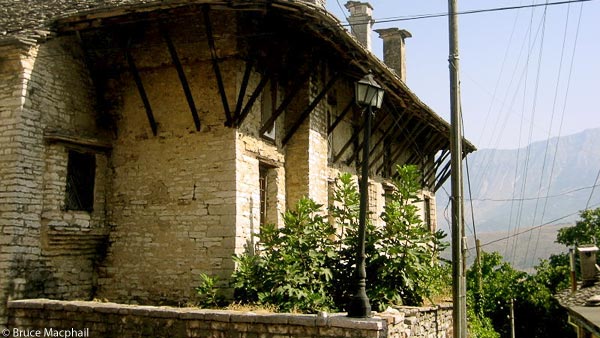 The old town of Gjirokastër became a UNESCO World Heritage Sight in 2005 as “a rare example of a well-preserved Ottoman town, built by farmers of large estate.” This will hopefully help it develop and take better care of the sights. While there are some visible recent improvements, more needs to be done especially regarding securing the maintenance of the old houses and sights. There is Tourist Information Centre which looks in the Bazaar area, with multilingual staff and newly produced brochures of the city which have a lot of information.

How to get there: Gjirokastër is located about 280 kilometres south of Tirana. The drive from the capital takes about 5 hours.

Where to stay: We recommend in a traditional Gjirokastër house. Prices start at 17 euro per person per night.

Read more about Albania from BalkanTravellers.com