DIONE was the titan goddess of the oracle of Dodona in Thesprotia. At the very ancient oracle of Zeus at Dodona, Dione , was the goddess resorted to in the company of Zeus, as many surviving votive inscriptions show. After the Iliad, this goddess was referred to as "Dionaea" or "Dione".

Dione was described as "the temple associate" of Zeus at Dodona. Lets see what they do represent:

I strongly beleive that only one nation was occupying at least the Mediterranien and the Middle east area. Their principal Gods were Sun & Moon(Zeus and Dione) or Dias & Dionea-Diell & Hone(Alb)

Re: Zeus and Dione

Do we have any confirmation from any academical research that Dioas and Dione is exactly the sun and the moon?
Yes we do: 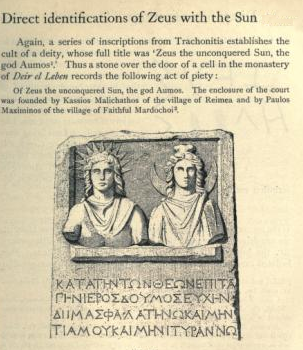 This is very serious research(Zeus: A Study of Ancient Religion (Zeus, God of the Bright Sky Vol 1)
by Arthur B. Cook) and gives us a great information that Zeus could be identified with Helios and/or Apollo.

Re: Zeus and Dione