The majority of Kosovars speak Gheg, but officially use Tosk for historical reasons. As Kosovo emerges in the form of an independent state, Migjen Kelmendi, former rock star and editor in chief of 'Java' magazine, discusses 'nationalist deliriums'


No one defines themselves as being Kosovar in Kosovo. People identify themselves by saying: 'I'm Albanian' or 'I'm Serbian' or 'I'm Askhali'. Words which can become disconcerting for western Europeans freshly landed in Pristina. What is Kosovo? Where is its identity?

When we meet Migjen Kelmendi in his office, in a small building in the centre of Pristina, he has his own unconventional ideas on the subject. He's a real character: a rock star during the communist period with the band 'The Traces', he became a journalist during the eighties. He opposed Milosevic's regime, and fled Kosovo at the time of the NATO bombings in 1999. When he returned home, he was asked to head RTK, Kosovo's main public television station. Kelmendi lasted a year, leaving it to kick off his own independent magazine Java, today's leading opposition newspaper.
Banished language

In opposition to Albanian nationalism, and against the wall of silence that keeps its weight on the press, and certainly against the discrimination that encircles Gheg. 'What nobody knows is that we all speak Gheg in Kosovo, one of the two dialects that makes up the Albanian language,' explains the passionate, cultivated man who in 2007 received the 'press freedom award' from Reporters Without Borders for his Gheg magazine - his pride and joy. 'But all the newspapers are written in Tosk, the other dialect! Put simply, they do this just because it does better. During its entire communist period, Kosovars tried to imitate Albania, to be identified with something.'
Hear the difference

When the magazine was launched in 2001, Kelmendi was put under pressure, subjected to intimidation and branded a 'traitor' to the Albanian cause. 'Today, the Gheg language is banished,' the forty-nine year old says. 'This rejection is far from being harmless. There's a desire to show a united Albanian people with a single identity but this isn't the reality of things! That's a nationalistic delirium, like believing in a Greater Albania or some Golden Age from the past.'
Like in 1945

'Those people won't tolerate difference,' Kelmendi says of nationalists. 'They don't like the others'. We, the Albanians, are not alone in Kosovo, even if we're surrounded by 90% Albanophones. Building a Kosovar state on an ethnic model will not get the job done,' he denounces. His dream for a multiethnic state is a Kosovo where sentiment doesn't rest on a community, but instead loyalty towards a state in service to its citizens.'All we need is a society based on common values.'

To further illustrate his point, Kelmendi gives a particularly symbolic symbolic example for western Europeans. 'In 1945 in Germany, it was impossible to talk about nationalism, even though it was necessary to rebuild the German state. We have to do the same thing here: develop the sentiment of the citizens, and demystify all nationalisms which divide Kosovo.'

Kelmendi is optimistic. 'There are signs that mentalities are progressing forwards in this sense. In the case of the flag of a future Kosovo, a contest was organised for the design of the new symbol of the Kosovar state. However, the one we see everywhere today is Albanian. For the nationalists, that competition was considered a crime of treason. But more than 1, 000 people participated - it's important for Kosovo.'
Profession: provocateur

He also points out the low ranking of the Albanian Nationalist party, which is under 1%. 'Another important thing is that the Ahtisaari plan is still in discussions in the international courts, and Kosovo's parliament has started to ratify it.'

There is also the fight against those big men in Belgrade: president Boris Tadi and prime minister Vojislav Koštunica who are 'nothing but copies of Milosevic. They use the Serbs in Kosovo like a political tool, excluding them from what's happening here until the day that the constitution comes about, when Serbian rights will be preserved. They too will have a place in parliament.'

The intellectual, musician and journalist leaves us with the willpower to bring back the canon into Albanian culture. 'I never changed occupations,' he concludes. 'I've always pushed boundaries and asked questions: I'm a provocateur.' Provocateur, yes, and with good cause.

Gheg dialekt is a treasure, we must preserve it at any cost. We must not look at it as something alien to the Albanian standart language identified with tosk dialect. The gheg dialect is ultimately an Albanian one, and we can track our history studing it.

This topic has been open many times on the other side. I have always said, that since we can not change the standard that has been taught in our schools now for quite sometimes, and is more understandable, in everyday business world, the next best thing, is to enter the dialect classes as required in our school system, form every region of our country, so we all learn the rich language that hides within these dialects, both Gheg, Tosk, Lab, Cham, ect.

Basicly there are only these main slight differences betwen Gheg and Tosk dialects:
(from Shaban Demiraj)
rhotacism - Gheg has n where Tosk has r
ā + tautosyllabic nasal > Gheg low-central or low-back vowel; > Tosk mid-central, or low-front-to-central vowel
ō > uo > Gheg vo, Tosk va
infinitival use of verbal adjective preceded in Gheg by me and in Tosk by për të
difference in lexemes, noun plurals, suppletion of the aorist system of the verb 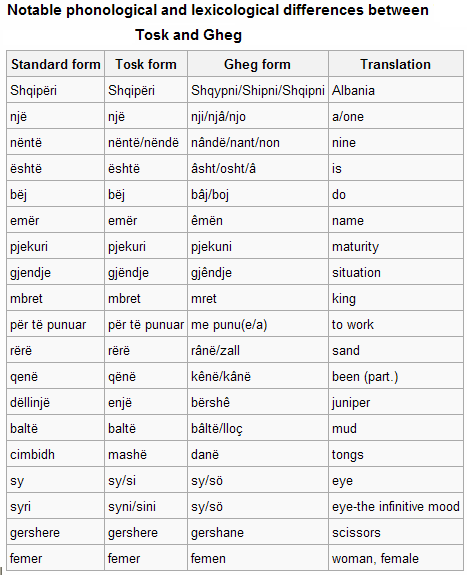