Let's talk a little bit about the "LEAGUE OF LEZHA" and the significance it had at the time of our history.
Please bring more information around this historical event in our country's history!

Re: 565 Anniversary League of Lezha

The League of Lezhë (2 March 1444-25 April 1479) was a confederation of all Albanian Principalities, created in the Assembly of Lezha in 2 March 1444. The league was led by Gjergj Kastrioti Skanderbeg and after his death by Lekë Dukagjini. Skanderbeg organized a meeting of Albanian nobles, the Arianits, Dukagjins, Spani, Thopias, Muzakas, and the leaders of the free Albanian principalities from the high mountains, in the town of Lezhë, where the nobles agreed to fight together for mutual gain against the common Turkish enemy and they voted Skanderbeg as their suzerain chief. The League of Lezhë was a confederation and each principality kept its sovereignty.

After the proclamation of the uprising against the Ottomans, Skanderbeg with his troops destroyed the garrison of Kruja and restored the independent principality of the Kastrioti. At that time, the Ottoman administration was already functioning in the family's estates - Ottoman garrisons had been stationed in the fortresses, any traces of the former rule of the Kastrioti had been erased. In this situation, Skanderbeg's struggle for overthrowing Ottoman power coincided with his desire to restore and keep the feudal heritage and authority of the Kastrioti clan.

Skanderbeg's example gave impetus to the liberation movements in Central and Northern Albania. Nearly all princes rejected the Ottoman rule, and the big Albanian clans reestablished their principalities. George Kastrioti made efforts to unite all moral and material resources of the individual families in a successful struggle against the Ottomans. To this effect, on 2 March 1444 he called in Lezhë an assembly of the Albanian princes, where almost all of them gathered: the Arianits, Dukagjin, Crnojevic, Balshas, Thopias, Muzakas, as well as the leaders of the free Albanian tribes from the high mountains. In spite of the discord among the princes, they founded a union, which went down in history by the name of the Albanian League of Lezhë. George Kastrioti - Skanderbeg was elected its leader, and commander in chief of its armed forces numbering 8,000 warriors.
In the light of the modern geopolitical science, the League of Lezhë represented an attempt to form a state union. In fact, this was a federation of independent rulers who undertook the duty to follow a common foreign policy, to defend jointly their independence and recruiting their allied armed forces. Naturally, it all required a collective budget for covering the military expenditures and each family contributed their mite to the common funds of the League. As a matter of fact, in our days the KLA was being recruited on the same principle, by collecting a tax from each family.
At the same time, each clan kept its possessions, its autonomy in solving the internal problems of its own estate. The formation and functioning of the League, of which George Kastrioti was the supreme feudal lord or suzerain, was the most significant attempt to build up an all-Albanian resistance against the Ottoman occupation and, simultaneously, an effort to create, for the span of its short-lived functioning, of some sort of a unified Albanian state. It is no chance at all that to this day Skanderbeg is a national hero of the Albanians, and the period of the Albanian League has been perceived by the Albanians as a peak in their history, especially if compared with the subsequent failed attempts, until the beginning of the 20th century, to constitute an independent statehood. 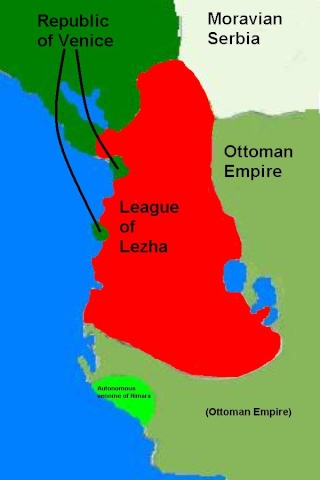 Battles of the League of Lezha

League of Lezha and the Ottoman Empire fought 25 battles and 24 of them ended with the victory of Scanderbeg forces. The one loss was a battle in Berat.