Live To Tell: A True Story of Religious Persecution in Communist Albania

Live To Tell: A True Story of Religious Persecution in Communist Albania

In 1944, Albania erupted in civil war. The communist party prevailed and acted quickly and brutally. By 1946, through executions, imprisonments, and mass banishments, the communists broke the back of Albania's freedom.

A young Franciscan Catholic and man of heroic character in this time of inhumanity, Friar Zef Pllumi was arrested, brutally tortured, imprisoned, and sent to labor camps. Through deeply personal descriptions of shocking atrocities, Fr. Pllumi focuses on his extraordinary will to survive and his powerful faith. His intense desire to "live to tell" honors those martyred with Christ's name on their lips. Fr. Pllumi was initially released in 1949.

Fr. Pllumi's memories are a brave confrontation of communism. His story's power lays in the fact that despite obscene efforts, the communist party could not succeed. As Fr. Pllumi states, "They think people are frightened before dying, but what they don't realize is that when you've arrived to a certain agonizing point, nothing is frightening anymore."

Fr. Pllumi's historical memoir also delivers clear lessons for today. Amid the many horrors, differences in beliefs melted away. Christians, Muslims, Albanians, Italians, and French alike, although wounded physically, emotionally, and spiritually, were still alive to help each other and stand together and triumph for mankind. 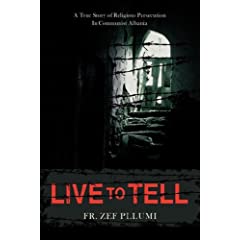