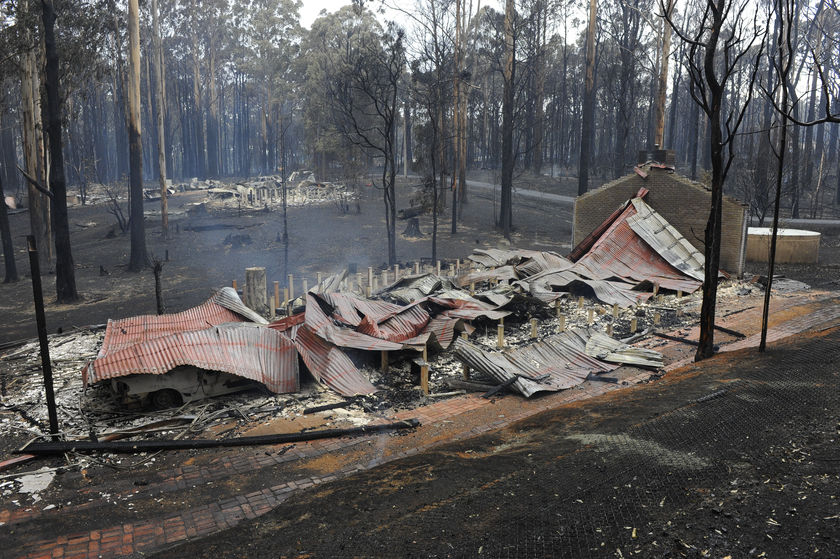 Nothing but rubble ... more than 500 homes were lost at Kinglake. (AAP: Andrew Brownbill)


The death toll from horrific bushfires across Victoria this weekend has reached 84, surpassing the number of people who perished in the 1983 Ash Wednesday blazes.
More than 700 homes have been lost in what is being described as 'Hell on Earth', and it is feared the death toll will pass 100.
Former television newsreader Brian Naylor and his wife Moiree are among the victims; their house at Kinglake, north of Melbourne, was engulfed by fire yesterday.
Twenty-six fires continue to burn across Victoria; 12 of those are out of control. Authorities suspect arsonists are responsible for some fires.
The Kinglake Complex blaze continues to burn out of control and so far has burnt through more than 220,000 hectares. Communities around Glenburn, Taggerty and Rubicon are being urged to remain alert for any threats to their homes.
The federal and Victorian governments have set up a Bushfire Relief Fund and $10 million in Centrelink payments for victims.
"Tonight our our resolve as Victorians is being tested," Victorian Premier John Brumby said in an address to the state.
"We know that tragically many lives have been lost ... and we have grave concerns for many more. We know that hundreds of Victorians have lost their houses. Out there it has been Hell on Earth.
"It is one of the most tragic events in Victoria's history. I am personally devastated by the tragedy. The scale of the tragedy defies comprehension.
"We all grieve with you. So many families, families like yours and mine, now have to rebuild. I can promise that we will not stop until you are safe and your lives and communities have been rebuilt."
The worst-hit areas are Kinglake, where at least 18 have died, St Andrews (12 lives lost), and Steeles Creek (seven dead).
Five people are dead in Callignee and Flowervale, three in Hazelwood, Whittlesea and Taggerty, and one in Jeeralang. More bodies have been found at Marysville, Humevale, Bendigo, Long Gully, Strathewan and Arthurs Creek.
Seventy-five people died in Victoria and New South Wales during the February 1983 Ash Wednesday fires.
'Shock and desperation'

The Kinglake area has been the hardest hit in terms of both lives lost and property damaged.
Most of the residents whose homes burnt down are sheltering at the Whittlesea Emergency Relief Centre, and the ABC's Matt O'Sullivan has described the scene there this evening.
"There are people arriving on buses with literally only the clothes they stand up in, that's all they have, many who have lost friends and neighbours and loved ones and just this enormous sense of shock and desperation," he said.
"If you can imagine your street and all of your neighbours' houses and your house just gone and you're not sure if those neighbours are still there.
"There are people coming here looking for emergency accommodation, they're trying to register with the Red Cross so they can let people know they're all right, they're just looking for some support, some counselling support, anything, just the support of each other."
The reporter spoke to a schoolteacher from Kinglake who said that in the afternoon, Kinglake had not been mentioned on the radio.
"So he went for a walk up the street - there was a bit of smoke around but it didn't really smell like a fire - and he asked the firies if things were going to be all right; they said yes," Mr O'Sullivan said.
"By the time he got back down the street to his house, five minutes later, it was pitch black and five minutes later his house was in flames. He says if he was 10 minutes later he wouldn't be here today.
"So he's lost his house, his school's gone up; obviously he's very worried about the kids that attend that school."
No warning

Jay Cherie from Kinglake Central said her family had no warning of what was to come.
"When the power went out I madly started to try and pack some things and in doing so it was like night-time all of a sudden. My husband came running into the house and said, 'grab the kids, grab the cat, we've got to get out'," she said.
"We got in the car and went to go down towards Yea and the flames were coming up over the paddocks towards our place and we could just only settle in the township; we knew straight away our home was gone.
"A lot of people made that same decision; there were probably about 100 cars in the same area that we were in at the time and we had gas bottles exploding around us.
"At one stage there my husband said to my children, 'get down on the floor', because we didn't know what was going to happen.
"We had fire coming in on the right-hand side of us on a paddock and we had houses to the left of us on fire; no-one knew what was going to happen.
"My little girl was saying to me, 'Mum am I going to see my friends again?', she also said to me, 'Mum am I going to live tomorrow?'."
Bracing for 'bad news'

Prime Minister Kevin Rudd visited bushfire ravaged regions today and warned the nation to brace itself for the likelihood of more deaths.
"We've come through bad times before and we'll come through this one," he said
"This Government will be behind these communities. I fear in the days ahead, though, the news is going to be bad and I believe the nation needs to prepare itself as the full facts become known."
Mr Rudd announced a $10-million relief fund as well as a multi-million-dollar appeal.
He said the Army and other Defence assets such as bulldozers and bedding would be available to help communities begin to rebuild in the aftermath of the destruction.
Interstate support

More than 4,000 local firefighters are battling blazes across Victoria, backed up by volunteers from New South Wales, South Australia, Tasmania and the ACT.
Country Fire Authority (CFA) Deputy Chief Fire Officer Steve Warrington says the interstate reinforcements are much appreciated.
"It's interesting in this part of the world, and I'm talking about Australia, that sense of mateship and camaraderie, we all stick together," he said.
"Victoria's gone to NSW and it's great to have NSW down with us, and that goes for every state, Western Australia, Queensland, they've all rung up and offered support to us today.
"From that point of view, it's quite heartwarming that we have this sense of culture and can-do in this country."
About 250 of the extra firefighters are from NSW, with that state also sending 25 search and rescue experts, nine identification experts and five paramedics.
The Northern Territory is sending a Disaster Victim Identification team, much like the one sent to Bali after the bombings.
-------------------------------